If it's new to the company, 360-degree feedback may trigger concern in those responsible for rolling it out. Here are some of our key learnings to run a 360-degree appraisal process that gets buy-in from the start and creates long-term value.

1: Realise you're not ready

The conundrum is: the only way to be ready for 360-degree appraisals is to get started. Bias, culture, critical perceptions, lack of buy-in and sensitivity are some of the reasons often quoted not to begin a feedback process. Employees are often afraid of feedback; stories of punitive use of results are not uncommon.

While these arguments seem logical, they are the very reason to introduce 360-degree feedback in your organisation. As the process unfolds, transparent and constructive communication increases, resistance erodes, and a mature feedback-centred culture develops.

Since no one is ever completely ready, you have to start somewhere. You are better off with a successful, smaller 360-degree feedback rollout than a failed larger one. You want a positive value-creating experience that you can build on.

There are two good starting points. The first is having a team or division that’s open to new experiences. The second is involving the whole or part of the senior leadership team. Senior leadership sets an excellent example for the rest of the organisation. They tend to proactively share positive communication and experiences with their team members in future 360-degree feedback iterations.

Change management is a fundamental part of scaling a 360-degree process. There are a few crucial things you need to get right. For instance, briefing sessions are an important way to get in touch with the group affected and discuss their concerns. A typical briefing session consists of the following:

While each company has its own dynamic, we see several common concerns:

What will the data be used for? Be clear in your answer. Ideally, use it for constructive purposes only. Be clear about how the outcomes will be applied and stick to that in practice.

Who will see my results? Participants are often concerned about the privacy and confidentiality of their results. Feedback providers are often worried about the anonymity of their ratings. Reassure employees by explaining how the rating process works, how anonymity will be ensured and how the results will be handled.

Where will the time come from? For a business to function day-to-day, everybody is typically involved in feedback at some level. A 360-degree process creates a space to collate and debrief this feedback in a structured way related to job requirements. Bringing in a structured process ends up saving time and creating efficiency.

What about bias? 360-degree feedback does not eliminate bias. Everybody is entitled to their own opinion. A 360-degree process takes several views and balances them to create an overall perspective. It's sometimes essential to hear something about yourself from someone who is different to you.

Each person that is measured should gain insight into their results. Each employee has invested in a process; to ensure long-term success, they need to receive commensurate value in return.

The best place for this feedback is a standing meeting between the line manager and their employee. Share the results prior to the meeting so the recipient has some time to absorb them. You don't want the feedback meeting to be the first time the results are seen. It's never good to be caught by surprise.

The 360-degree results provide an indisputable reference that anchors and structures the feedback conversation. Substance is given to issues that are sometimes difficult to pin down, and the feedback report often confirms things that have previously been discussed.

360-degree feedback is part of talent development. However, it does not replace traditional performance management and KPI data.

Standard 360-degree feedback tools tend to focus on performance only. While this is important, it's not the only thing that matters. It's all well and good to know you have to improve something, but it is so much more valuable to benchmark this against your potential for improvement.

The HFMtalentindex Online Development report integrates job-specific competency-based 360-degree performance feedback with potential information from a psychometric personality test. Relevant developmental advice is then given on the actual skill gaps. Per competency, participants can gain an understanding of both their personality-based potential as well as their demonstrated performance, answering the questions: 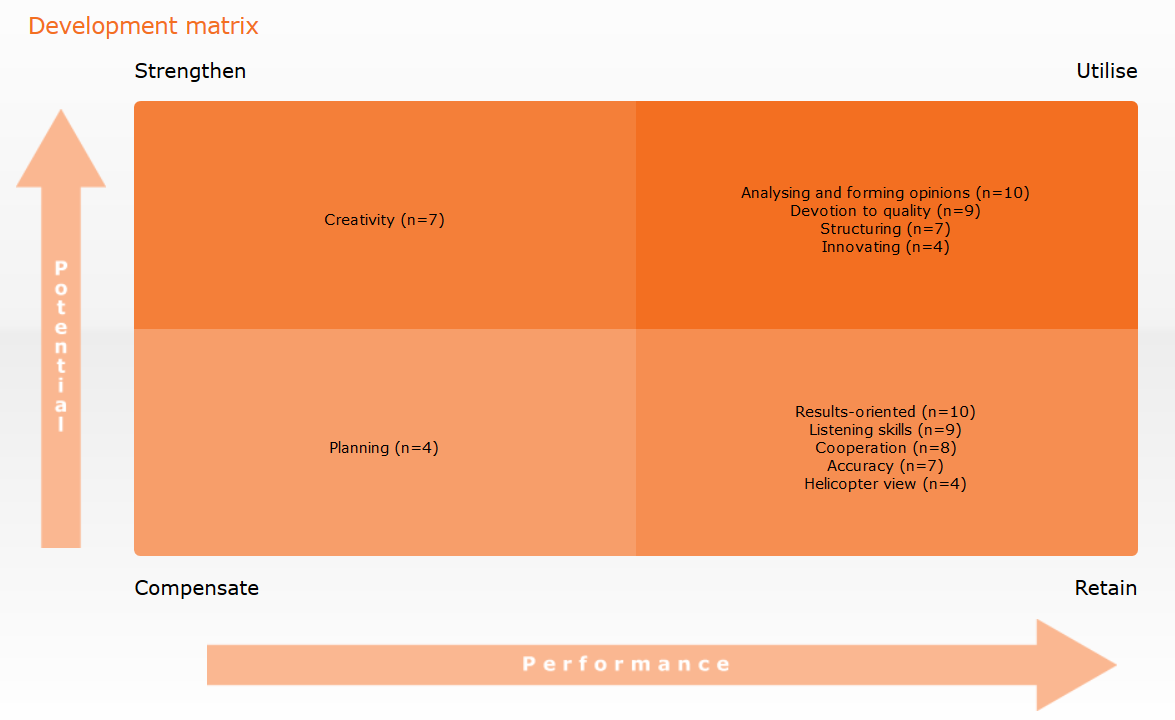 Besides individual information, your 360-degree process should provide you with analytical information about the status of your talent pool. It is essential to harness your data and use these insights to the fullest. By reviewing group analytics, you can determine general strengths and development needs and plot a 9-grid talent matrix from the performance information. This allows 360-degree surveys to flow naturally into succession planning .

Running a 360-degree process within an online talent system such as HFMtalentindex means that talent dashboards and group analytics are automatically available.

After your initial success, plan the next iteration. Typically, 360-degree feedback is repeated annually as a regular milestone in a talent strategy. Each iteration allows you to assess development progress or regression across time, as well as the ROI of various learning initiatives.

Start your next iteration with a critical review of what went well and what didn’t. Obtain input from stakeholders, review your policies and critically consider your competency profile(s).

Plan your next iteration to deepen and widen the reach of the appraisals. Build on familiarity; ideally, feedback providers in the previous iteration become participants in the next.

Be sure to provide feedback on your learnings from the previous iteration in your future briefings. Honesty is always the best policy.

9: Benefit from a growing feedback culture

Resistance is normal at the beginning. As people, we’re not used to being open; we're not used to feedback being used constructively.

As the process rolls out, you will find that employees involved in successive iterations see the value and become more engaged. Over time, you will see an open, effective feedback culture emerging.