Learning Agility can be defined as the ability to develop new effective behaviours based on new experiences, which can be applied in practice. Numerous studies  have found that Learning Agility is an important predictor of people’s openness to learn new things, their performance within their current role as well as their future performance. In addition, research also shows that high-performing teams tend to score higher on Learning Agility, compared to less effective teams.

We set out to further explore the relationship between Agility and team performance: The pattern of Learning Agility results for different teams is explored, and these insights are used to provide practical guidelines and advice to apply in your organisation.

Confirming the relationship between Learning Agility and team performance

Learning Agility: exploring Can and Want

Each of the five Learning Agilities comprises two dimensions: Can and Want. Can refers to the individual’s personality-based aptitude for agile behaviours, while Want refers to their motivations-based drive towards agility. While Do – a person’s observed behaviour – can also be measured, this was not included in the current study.

Can and Want vs team performance

On average, high performing teams score higher on both Can and Want, compared to low performance teams (see Graph 2). High performing teams are more naturally inclined towards agile behaviours (Can), and also seem to be more motivated to learn from change and experience (Want).

Three of the five Learning Agility dimensions have been explored in more detail, as each presents a unique pattern of results. These dimensions are Mental Agility, Results Agility and Self-awareness.

Mental agility: Can vs Want 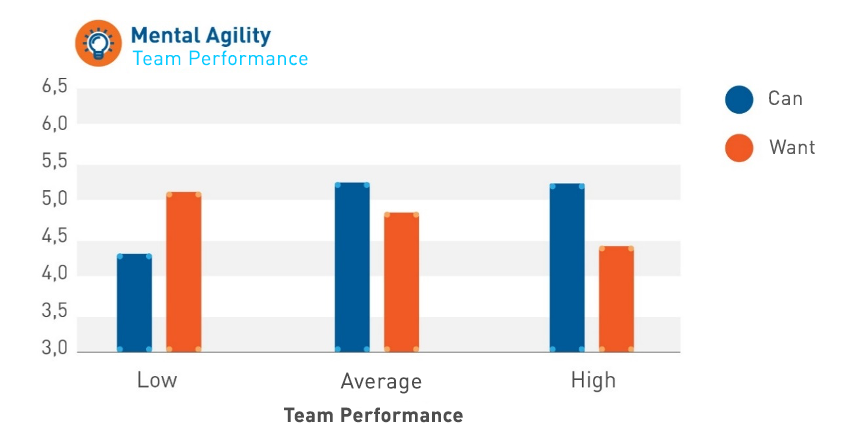 For instance, a team that is highly motivated (Want) may have the desire to work in a creative or analytical fashion but may lack the ability to do so (Can).

Practically, teams usually investigate problems prior to drawing conclusions and as such they need to be able to recognise the underlying causes of situations. This means they need to possess the ability to connect the different angles and possibilities that others may not necessarily see. In essence, having the motivation (Want) to be analytical and not necessarily possessing the ability to be so (Can), is insufficient for high performance. Evidently, teams with lower performance want to be creative and analytical, but it may cost them more effort and energy, compared to teams with the natural talent for Mental Agility.

Results Agility: “Wanting to be”

In contrast to Mental Agility, on Results Agility successful teams seem to be motivated to achieve results (Want), but they may not necessarily possess the talent to do so (Can). Thus, the differences between the overall scores across groups may seem small (see graph 4). 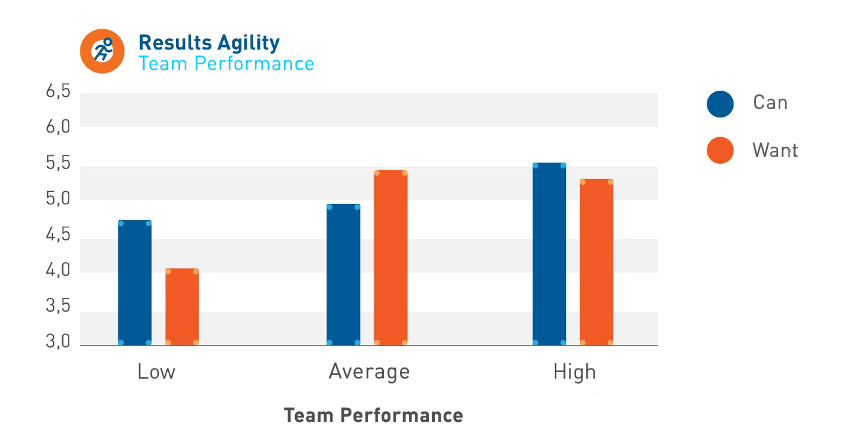 Results Agility may be viewed as being more about Wanting/motivation and less about Can/innate personality and talent. To elaborate further, high performing teams are driven to achieve success and this, in turn, drives performance. Even so, the Can component should not be disregarded here:

In respect of the two components (Can; Want) the results of the desire to achieve are important. Even so, one should ideally possess the behavioural inclination to achieve good results. This is demonstrated in the difference between the “Can” scores between Average and High performance teams. While Want is the most important element, behaviour (Can) plays a secondary, yet important, role for performance.  The results of Average performance teams are highly motivated, yet possess less natural talent, compared to the High performers.

Self-awareness: Can and Want

Earlier research has revealed that Self–awareness plays a significant role within team performance. In fact, teams with members who score higher on Self-awareness tend to receive higher performance ratings compared to team members who score lower. Moreover, high Self-awareness (being conscious of one’s own strengths and weaknesses, being eager to receive feedback, being excited to learn and develop further) is a strong contributing factor to the performance of the overall team. 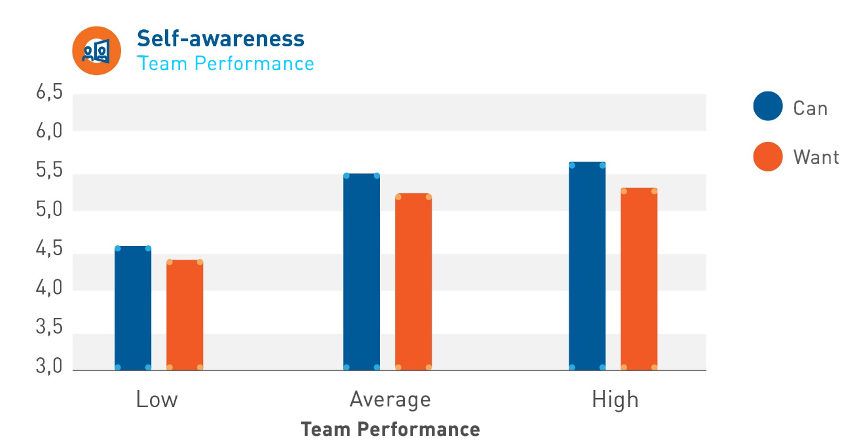 With regards to Self-awareness, both Can and Want are important. Want is the drive for growth and development, while Can centres around the ability to self-reflect and amend one’s own behaviour. In this study, Can seems to be slightly more important compared to the Want component.

A key question to reflect upon – What is the recipe for an ideal team?

Are Mentally Agile, Result Agile, and fully Self-aware teams ideal for every situation? Based on the above analyses, do we in fact possess a model against which we can assemble a successful team? A High performance team can be viewed as consisting of members who possess the natural inclination towards creativity and analysis, while also having the drive to achieve success. Also, they tend to practice self-insight and are eager to develop. With this in mind, how can this knowledge be applied effectively in practice? How can teams make use of this information? What should one emphasise in individual and team development?

From the analyses above, the focus was placed on the average team scores and not the distribution of scores between the team members and their performance. Thus, there are additional questions to ask, such as:

In essence, what is the significance of the distribution of team scores on Learning Agility? 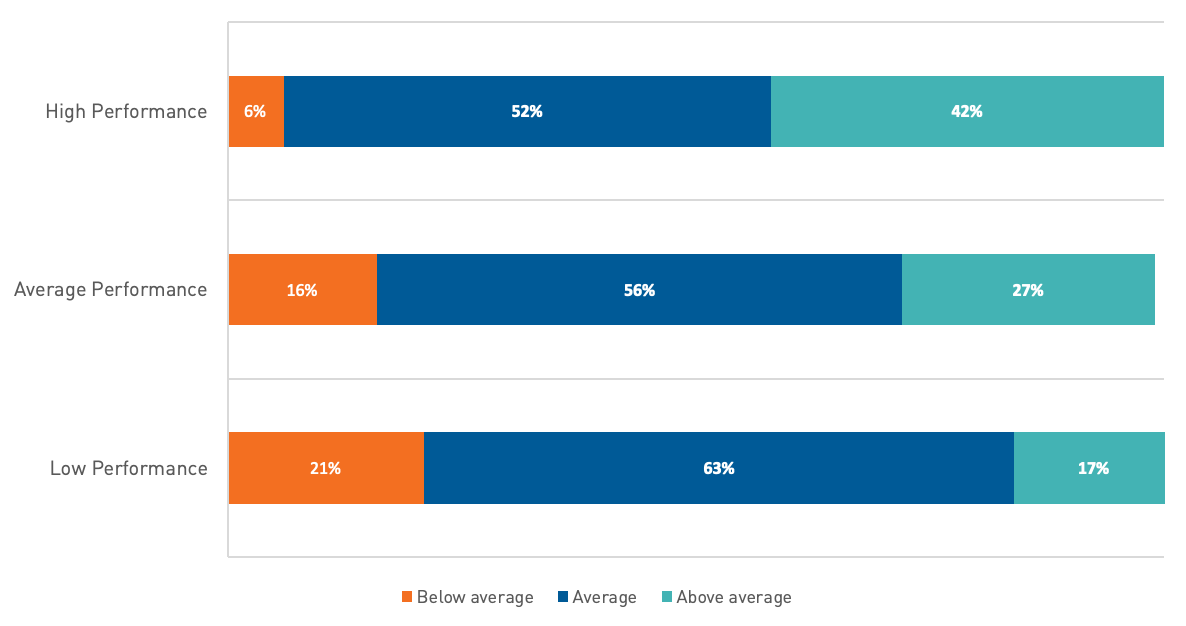 It is recommended that a team should consist of a significant proportion of members with high Learning Agility. Nevertheless, not every team member needs to score above average on Learning Agility; the team is likely to perform well, even if half of its members score in the average range. Despite this, it is important that the low scorers are compensated by those members who score high or significantly above average.

Within recent years there has been a surge in research into the composition, functioning and performance of teams. As a result, many different theories and models have been developed; each of these include factors that may influence team success. Our research into the impact of Learning Agility on team functioning represents a new topic in this area and contributes to existing knowledge with unique insights.

To summarise our findings, high performing teams include people who are analytically minded (Mental Agility) and who are motivated to achieve success (Results Agility). In addition, if a team’s members actively seek out self-insight and are open to self-development (score higher on Self-awareness), this also contributes to performance.

Getting started with team development

If you would like to find out more about the strengths and development areas of your team, TeamsDNA is the ideal solution.  TeamsDNA provides insight into the team’s scores on each of the Learning Agility dimensions, as well as the Can and Want components. Besides Agility, TeamsDNA also includes results on top and bottom competencies, preferred team roles, key motivators and, optionally, cognitive ability.

Armed with this information, the team can be provided with the group level results, and each individual can also access his/her individual TeamsDNA report.

Research & Papers
Learning Agility and leader success: Results from a meta-analysis
A large number of practical case studies and testimonials speak to the power of Learning Agility in predicting high potentials and future high performers...
Interviews
HR and the agile workplace: Interview with Dr Jerry Gule
Organisations in South Africa are undergoing a lot of changes in terms of digitisation, new technologies and shifting job roles...
Links:
Find out more about Learning Agility
TeamsDNA